Rick Yancey is a writer known by many loving fans, he has written books such as The Infinite Sea ( #2 of The 5th Wave ), The Monstrumologist, The Highly Effective Detective and so on. It’s said there might be a movie later on in 2015-2016… Who would know. After the heap of reviews this book has gotten most people LOVE it, maybe love is a bit of a strong word. Maybe it’s more of like, most people like the book and have anticipated the new book ‘The Infinite Sea’ book 2 of this series. Although I haven’t read the second book recently it is said that it isn’t as good as the first book. I was like “Of course it’s not going to be as good as the first.” It is always expected that those types of books are NEVER as good as the first.

Reviews the people have given this book:  (From Amazon and Goodreads)

Wow! I was blown away by this story!! I was completely riveted by every single word! My heart raced, and I was on the edge of my seat pretty much the entire time.

If you could buy just one book this year, this one should be at the top of your list.

I don’t get the hype, or why everyone is so incredibly taken by this book. It really doesn’t stand out among the hoards of post-apoc. And the insta-love really turned me off.

Okay, so these reviews are from others who have read the book and there has not been a majority which rules… It’s been more of a 50 50 like and not like. When I read this I was pretty engaged with it, but there was times where it just rambled on about stuff like the instant relationship with Evan and Cassie which is kinda weird. Especially cause he’s part alien or been possessed by one, I wouldn’t know because it’s been a while since I had read the book. Well he looks human but is sent to kill humans which means he’s either alien himself or a traitor… I found this quite confusing… But over all this book was very good!

The explanations of the 1st, 2nd, 3rd and 4th wave weren’t very interesting but it told you the story that needed to be told. And parts of the story that HAD to be told… As I said before sometimes it waffled on on what it was actually attempting to explain, some of it was good but was not nescessarily needed.

This book has a good plot over all and has strong characters within it as well as the odd alien. This book would be highly suited to a teenage audience, such as 13 years to 17 or 18 years if such years are interested in reading apocolyptic books like this one.

The descriptions of the aliens weren’t that good as most of the time they stayed in that big ship of theirs in the sky watching the remainder of the human race rot from either starvation, disease or death. I was like how in gods name can a sixteen year old girl survive this!? ( I’m pretty sure she was sixteen ) Before the 1st wave she was living a happy normal life with her family and then BANG her parents are killed and Sammy is taken away and all she has left to fight for is what? Some legend that Sammy is still alive? Well of course Sammy is alive but how can she believe he is?

Cassie learnt how to fire a gun and protect herself within the time the waves were going on, then I was thinking ‘Hang on. If there is an alien invasion going on how can you learn that stuff so quickley.’ Then I thought ‘yeah it’s an alien invasion and she would have probably have to have learnt this’. Some bits are nearly un-believable for what a normal sixteen year old girl would do in this instance but I suppose there are aliens on earth here. So it would be implied.

Okay I have given this book a good 🌟🌟🌟🌟 (four stars) because I found this book actually quite interesting other than the few points I have just pointed out above. Why so many negatives you may ask? Well it’s because I just felt like going on a little bit of a rant this fine 1st of Janurary night of 2015 and because well. I felt like it.

Now, it’s the dawn of the 5th wave, and on a lonely stretch of highway, Cassie runs from Them. The beings who only look human, who roam the countryside killing anyone they see. Who have scattered Earth’s last survivors. To stay alone is to stay alive, Cassie believes, until she meets Evan Walker.

Beguiling and mysterious, Evan Walker may be Cassie’s only hope for rescuing her brother—or even saving herself. But Cassie must choose: between trust and despair, between defiance and surrender, between life and death. To give up or to get up.

Anna Todd an all famous writer, she mainly writes on a website called “Wattpad” which is a company that makes users have the experience of having their own book published onto the internet or you could just read other peoples books. Name any genre and they have got it, wattpad also sometimes publishes some of the most famous or featured books on the website, this was probably Anna Todd’s most greatest wish of all time that was actually granted. Making all the fans of her book After jump for joy.

This book has had mixed reviews ones such as: (Posts from Amazon, Goodreads and Wattpad)

I’m reading the series for the second time! I’m pretty sure it’ll have the same effects on me as the first!

I love this book 2nd time reading it

The book gives off a terrible message.

I decided to give fan fiction a try. This, being one of the most popular fan fiction stories, was my first option to try. So, like a trooper, I carried myself through the whole story, only to be greatly disappointed.

Okay, I love Wattpad, but seriously? How can they promote this garbage?

I was almost at the point like when Twilight, that I just stop everything and my sole focus was reading the book.

So why such bad reviews? Maybe people are getting how inappropriate it is for teens, as far as I have seen it is rates PG 13+ but in my opinion it’s worth a M 15+ or MA 18+. She may give warnings at the start of the book but giving this book to an unsuspecting young audience isn’t very mature in Anna Todd’s part. She should have thought about the people she is aiming this book at… She might have but it doesn’t seem like that… It doesn’t really have a story line either It’s just a bunch of fragments of an angry, emotionally abusive boyfriend and an annoying, delusional girlfriend sown together. They don’t really fall in love, it’s just a sexual desire which is never appropriate for younger audiences. When I read this book I though that it went over the top, I had no idea that it was a one direction fanfiction at first and I read it…
I also found that it was one of THREE books, not that I’m against sequels but although I hadn’t read the other two books I knew there was just going to be more of what I have just said. I don’t see why people are so interested in this book. In my opinion other books on wattpad are FAR better than this book, since I have an account I have read many fantastic books. I wouldn’t classify this book as fantastic… I’d call it an inappropriate piece of dead tree, because wattpad has a mass amount of young readers and writers from the age of 10-20 and sometimes older people read too.
This is one of the most famous One Direction fan fictions this year and it was written all on wattpad, Anna Todd was probably swept off her feet when she got told that she could get a publishing contract as well as maybe getting a movie for her story. Though… Lots of people loved and hated this book so I had no telling in how popular it would get with being on Wattpad. I had never heard of the book After before I had picked it up in BigW, I had read the back of the book and look what it said ⬇️ I read this and had thought it sounds good…
Tessa is a good girl with a sweet, reliable boyfriend back home. She’s got direction, ambition, and a mother who’s intent on keeping her that way.

But she’s barely moved into her freshman dorm when she runs into Hardin. With his tousled brown hair, cocky British accent, tattoos, and lip ring, Hardin is cute and different from what she’s used to.

But he’s also rude—to the point of cruelty, even. For all his attitude, Tessa should hate Hardin. And she does—until she finds herself alone with him in his room. Something about his dark mood grabs her, and when they kiss it ignites within her a passion she’s never known before.

He’ll call her beautiful, then insist he isn’t the one for her and disappear again and again. Despite the reckless way he treats her, Tessa is compelled to dig deeper and find the real Hardin beneath all his lies. He pushes her away again and again, yet every time she pushes back, he only pulls her in deeper.

Tessa already has the perfect boyfriend. So why is she trying so hard to overcome her own hurt pride and Hardin’s prejudice about nice girls like her?

I give this book a 🌟 and a half, please comment below and tell me what you think of this book. If you take me seriously there is something wrong, so if you take it so seriously coming to me and telling me what I said was rude I will tell you because I’m just a writer who tells the truth and reviews honestly like all reviewers are supposed to do 🙂
Thankyou! 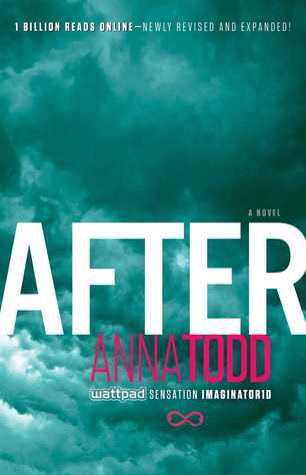 Hello and welcome to my blog! If you have found this blog you are obviously interested in many of the best and worst books of this year ( or the next few years ). I chose the name “Bookstonia” because I found it on a domain website generator, I was going to roll with “Bookosphere” but that of course was taken. I also had trouble finding a user name but I decided to use one of my original ones from something different.

Ok back to info on the website, I will review books of this year and next year ( 2015 ) and tell you comments people have left upon them and of course what I think of them. I am just a simple reviewer. So don’t get upset if you don’t like what I’m writing, I’m one of those people who tell you what I am thinking.

I will rate these books with stars ( 🌟🌟🌟🌟🌟 ) out of five with no halves which other people do if they can’t determine the scores for that book. I will only do that when nescessary.